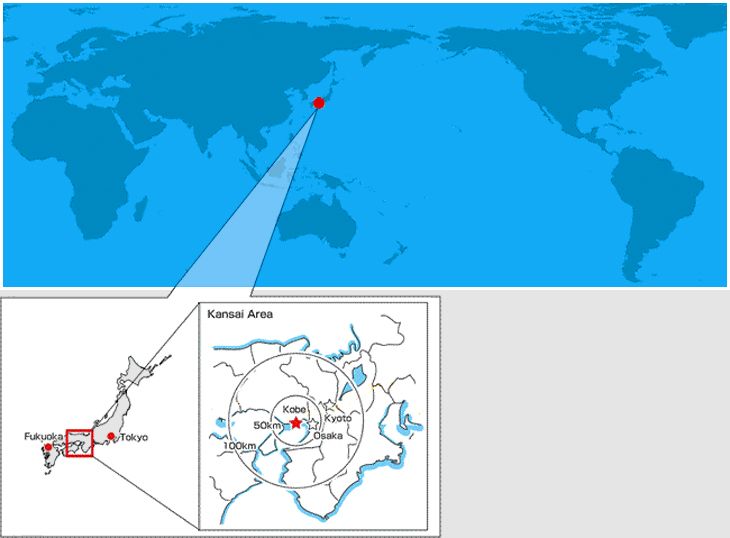 Kobe has been developing as a hub for trade with China and the Korean Peninsula since the 8th century; and after a 250 year period of isolation during the Edo Era (1603-1867), the Port of Kobe was re-opened as an international trading port. The Port of Kobe is located almost centrally on the Japanese archipelago and is situated on one of the main international sea routes. Since the port opened, port-related heavy industries such as ship-building, steelworks and rubber production have developed along with the port.

Also, following the opening of the port, there was a rapid influx of Western culture into Kobe; foreigners came to Kobe on business and took up residence in the Old Foreign Settlement and Kitano Ijinkan areas. Furthermore, aspects of foreign culture such as films, golf and jazz soon spread across Japan from Kobe. Even now Kobe has a unique atmosphere that comes from a mixture of traditional Japanese aspects such as Onsen hot-springs and sake breweries, mixed together with foreign features such as the Ijinkan area and China Town.

Today, Kobe is blessed with easy access by land, air and sea, thanks to the port, Kobe Airport and the nearby Kansai International Airport; and as a result many foreign businesses are gathering in Kobe. In addition to the heavy steelwork and shipbuilding industries; the western clothing, furniture and confectionery industries; and the local sake brewing industry, in recent years health, welfare and medical companies working in the advanced technology field have experience huge growth, based on the advancement of the Kobe Medical Industry Development Project.

Currently, there are 1.53 million inhabitants living in the 9 administrative districts of Kobe On October 16th 2008, Kobe was designated as a City of Design within the UNESCO Creative Cities Network.

To create its new attractions and vitality and improve quality of life, Kobe City will work together with its residents to promote “DESIGN CITY KOBE” strategies by reconsidering and enhancing the City’s unique resources and attractions from a design perspective.